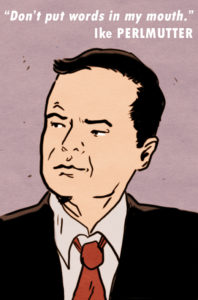 My Graphic Novel series about the creation of Marvel Comics ‘only’ covers the 1922-1992 era, so Isaac “Ike” Perlmutter — chairman of Marvel and one of the largest Disney individual shareholders — will only appear for a few pages in it. Thought I’d share some details of Mr Perlmutter’s life before Marvel:

Isaac Perlmutter was born on December 1, 1942 in Tel-Aviv.

In the early years of the establishment of Israel (1948), the health system there suffered major losses, structural weaknesses, budgets constraints, due to the end of the British Mandate. Mr Perlmutter said that when he was a teenager, living in Tel-Aviv, he lost his mother and later his sister, because of those health system failures. Those deaths, due to preventable causes, led him to donate money to a few medical centers through the years. 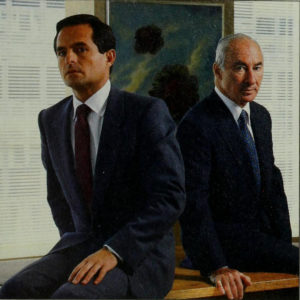 IDF & Defense Etablishment Archives of  Tel Aviv shows that in 1967, Ike was conscripted into the Israel Defense Forces and fought in the Six-Day War.

Isaac read BUCKI (named after Buck Rogers), weekly magazine which published in Israel comicbooks from Marvel, DC and others. “Bucki” was founded by milionnaire P. Orbach. It published “Thor”, “X-Men” and “Iron Man”. Artist Asher Dickstein was the main editor of Buki and drew some of the covers.

In late 1969, Isaac Perlmutter moved to the United States, with a little bit more than $200 in his pocket (less than $1800 actual dollars). He met Laura Sparer at the Borscht Belt Resort in the Catskills in 1970. They became husband and wife in 1971.

After doing odd jobs for a few years, he met Bernard Marden, then president of Marden-Kane Inc. Ike was asked by Mr Marden of finding and trafficking gift merchandise used by TV shows as free giveaways.

Ike proved to be pretty good in obtaining good deals for Marden, and with the help of financing from Laura Perlmutter’s father, Ike Perlmutter and Bernard Marden founded Odd Lot Trading Inc in the late 70’s. Odd Lot used to operate a chain of stores (66 stores in 1983, 78 in 1984, 160 in 1988) that offered manufacturers’ close-outs and discontinued merchandise at discounted prices.

Ike & Bernard business model was to buy failing companies at a low price, get their stock and sell it through their Odd Lot stores. One example of a company that was ‘used’ this way: the Tangible Inc in 1982.

In 1984 Perlmutter and Marden bought Mattel Electronics, via Odd Lot. They renamed their new acquisition Intellivision Inc. Perlmutter wanted to do a conversion of the Spider-Man Atari Game from 1982 for the Intellevision computer module, but it never happened.

Odd Lot Trading Inc. became a Revco Subsidiary in April 1984, and after that, I beliebe Perlmutter’s history as a venture capitalist is pretty well documented. 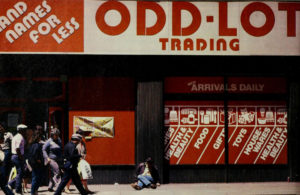